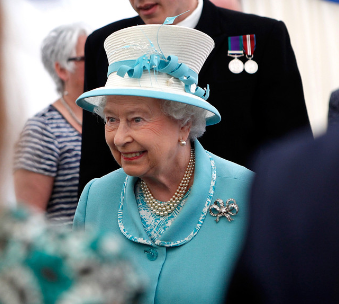 “My father was proud to serve Her Majesty for many years. First in The Royal Green Jackets regiment of the Army serving in Northern Ireland, Germany and Cyprus. After his time in the Army he served Her Majesty as a Metropolitan Police officer and finally, as a Ministry of Defence Police Officer serving in Afghanistan, the Houses of Parliament and Whitehall.

Throughout his service he wore his royal insignia with pride, he took his duty with the utmost seriousness, and was lucky to meet Her Majesty on several occasions. After each occasion he spoke of her humility, kindness and dignity. He used these facets of Her Majesty’s leadership and example as teachings in how he raised my brother and I, always sharing how these three made her such a strong role model to us all.”

“I was fortunate enough to meet the Queen back in 2014 when she held a visit to HMS Lancaster whilst the ship was alongside in Portsmouth. My partner was serving on HMS Lancaster, and at the time, the ship was affiliated to the Queen (the Queen’s Frigate). She had been onboard for a private lunch before meeting members of the crew and their families.

“I will never forget that day – it was such an honour and privilege to have been given the opportunity to meet Her Majesty and gently shake her hand. I remember her chatting to my partner asking him what he did onboard whilst I just stood there dumbfounded – I couldn’t quite believe that she was standing right in front of me! She was so lovely and gracious, and at the time I just wanted to give her a big hug, almost like you would a grandmother! She had such a twinkle in her eyes and was very interested and involved in what the ship’s crew had to say. Such a wonderful lady in every way! A memory to cherish forever.”

“What a lovely tribute to our dear Queen. Both of my parents were born in the Queen’s coronation year of 1953. My mum was aptly named Elizabeth and my dad was born on the day of the coronation – June 2nd and took Philip as his middle name. He went on to join the navy just before his 16th birthday and spent most of his working life serving Our Majesty, his final role before retiring was in the forces career office, where he enjoyed welcoming the new recruits to the services that he lived and breathed.

“As a service child I caught glimpses of Royal family members at naval parades and events, and grew up with an absolute admiration for Our Queen, my own children share this same affection. She is all we have ever known in our lifetime, and has left us with a lasting legacy for her humility, humour, loyalty and precious words of wisdom. We have been so truly blessed as a nation, she will remain forever in our hearts.”

Students support member of the public in emergency